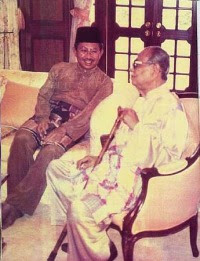 Old friends: Tengku Razaleigh with Tunku during the latter's visit to Kota Bharu at the invitation of the Sultan and Raja Perempuan of Kelantan on Nov 6, 1988. — Courtesy of Tunku Sofiah Jewa

From AllMalaysia.info, 27 August 2007
He was portrayed as being anti-Malay in the aftermath of May 13 and his name sullied. Nothing could have been further from the truth.

LONG before I was even born, my father Tengku Mohamed Hamzah, the Menteri Besar of Kelantan, had been close to the royal family of Kedah. In the late 1950s, my father used to call on Ayah (Tunku Abdul Rahman) at The Residency whenever he was in Kuala Lumpur to attend the Rulers’ Conference.

As for me, I met Ayah regularly while studying economics at Queen’s University in Belfast, when I was also Secretary-General of the Malay Society of United Kingdom.

In February 1962, when I was in my final year reading law at Lincoln's Inn, my father had a fatal stroke, thus forcing my early return to Malaya. My plane took me to Singapore. Ayah was kind enough to have sent a special plane to transport me from Singapore to Kota Bharu.

He asked me to remain in the country and become politically involved in Kelantan. However, I was not quite ready for electoral politics. In the absence of my father, I had a responsibility to manage my family affairs, and make a mark, if possible, in the financial sector.

Nevertheless, thanks to Ayah, I was myself inspired to swap my Saville-Row city suits for traditional Malay garb and to venture forth into the uncertainties of Kelantan politics.

The fact that he was a prince did not inhibit him from going to the kampung to win support for self-government and later independence. I came to realise through the sheer force of Ayah’s living example that royal antecedence did not give us any special privileges in an independent Malaya – apart from those dictated by protocol – and that we would have to take our place as citizens on par with the rest.

Ayah was a Malay gentleman who was steeped in adat. He was extremely hospitable to his guests. Despite the great age gap between both of us, whenever I visited Ayah, I would find him literally waiting for me at the door.

The tragic part of it all was that despite his good intentions and great concern for the Malay community, Ayah was portrayed as being anti-Malay in the aftermath of May 13 and his name sullied.

Nothing could have been further from the truth. It was Ayah who had ensured Malay predominance in the country, to the extent that he was willing to allow Singapore to leave peacefully in the larger interest of the Malay agenda, despite the political cost.

Again it was Ayah who ensured that certain provisions and safeguards were included in the Constitution to protect the special position of the Malays. He also ensured that the Civil Service, Military and Police Force would be headed by Malays.

It was during Ayah’s premiership that massive rural development programmes were carried out to eradicate poverty among the Malays: a nascent class of Malay entrepreneurs was created through the Bumiputra Economic Congresses of 1965 and 1968, plus institutions such as Bank Bumiputra Malaysia Berhad, PERNAS (National Equity Corporation), MARA (Council of Trust for the Indigenous People) and FAMA (Federal Agricultural Marketing Authority) were established.

Despite these initiatives, efforts were directed at discrediting and nullifying Ayah’s contributions towards Malay pre-dominance in the country.

Although Ayah was the mastermind behind the grand design to help the Malays, the Malays chose to see Tun Razak’s sole hand in the various departmental projects that were carried out during Ayah’s era.

It was also unfortunate that my close association with (Tun) Dr Mahathir (Mohamad) was misconstrued. Ayah had fathered me politically in Umno.

I was of course considerably more pro-Tunku than Mahathir or anyone else, but my sympathies for Mahathir upset Ayah.

When Ayah retired, he was in financial straits. The Government allocated a bungalow in the Federal Capital for him to stay for life. This was the government quarters at No. 1, Kenny Road (now Jalan Bukit Tunku).

When I became Finance Minister, I felt that as a national icon, Ayah must be given the opportunity to own the house. I discussed the matter with Tun Hussein Onn and it was decided that the house should be sold to Ayah at a special price normally fixed for the benefit of the disadvantaged, namely one-eighth of the market value. Since even that was too expensive for Ayah, I was more than happy to arrange for the money.

In 1989, differences between Mahathir and me resulted in the formation of Semangat 46, of which I was the president, and Ayah the adviser. Ayah became the first registered member of Semangat 46; Tun Hussein Onn was the second in line.

It was Ayah who insisted that a party be formed when Umno Baru was registered. He was concerned that having blacklisted leaders of old Umno, the leadership of Umno Baru would bar the supporters and sympathisers of the so-called Team B from joining Umno Baru.

Although he was instrumental in setting up Semangat 46, Tunku also advised me to keep an open mind because he was concerned about Malay unity. He advised me that in the event there was an opportunity for both sides to come together, then Semangat 46 should be dissolved.

Even in his old age, Ayah was determined to set things right. As in Ayah’s era as Prime Minister, his was still the healing touch.

Born on 13th April 1937, into the Kelantan royal household, Tengku Tan Sri Razaleigh Hamzah, affectionately known as Ku Li, has been an MP since 1969. In Umno, he was elected to the Supreme Council in 1971, and became vice-president in 1975. He also served as Finance Minister under Prime Minister Tun Hussein Onn and is currently the MP for Gua Musang.

Thank you for this nice account. At least after having read it i m now more better informed. It is also quite a nostalgic read.

So is iphone like a mobile phone which you could talk?

Nice post and this post helped me alot in my college assignement. Thank you as your information.

Cool website, I hadn't come across mykuli.blogspot.com previously during my searches!
Continue the good work!

Thanks for sharing the link, but unfortunately it seems to be offline... Does anybody have a mirror or another source? Please answer to my post if you do!

I would appreciate if a staff member here at mykuli.blogspot.com could post it.

Thanks for sharing this link - but unfortunately it seems to be down? Does anybody here at mykuli.blogspot.com have a mirror or another source?

Incredibly, great posting. Thanks for revealing this goods. I must say i value it

Sorry for the stupid question. What is the best search engine http://google.com or http://yahoo.com?

definitely wonderful insight details discussing, expect this can be actually helpful for everybody

Hello. Facebook takes a [url=http://www.onlinecraps.gd]casinos online[/url] risk on 888 casino apportion: Facebook is expanding its efforts to put further real-money gaming to millions of British users after announcing a order with the online gambling company 888 Holdings.And Bye.

[url=http://www.longchampsacsa.n.nu]longchamp soldes[/url] The best kind of flood barrier is a professionally engineered levee, placed between your property and the source of rising water. Obviously, plans for such a barrier would have to be made and executed well before the time of year when you'd expect flooding. The reason why more people don't Mulberry Holdalls Clipper Bag Black for Men,Mulberry outlet uk has been drawing wide attention for its high quality. build levees to protect their property when they live in a confirmed flood area is primarily expense..
[url=http://longchampbagsd.webeden.net/#/blog/4574070481]sacs longchamps[/url] Many recommend using a Teflon or roller presser foot or placing tissue paper over the stitching area to help keep things under control. In addition, the wrong side of oilcloth has much better behavior- so a little extra planning can minimize right side sewing. This tutorial uses a combination of wrong side sewing and bias Mulberry is an English brand name that has been around for over one hundred years. Every fashion woman is sure to love a great handbag.Highly Appreciated Mulberry Women's Smaller Bayswater Leather Shoulder Black Bag is stylish, exquisite design. tape to make the use of special presser feet or tissue paper unnecessary..
[url=http://saclongchampa.angelfire.com/]sac longchamp[/url] Leather purses are always the all-time favorite. Leather is very classy and eye appealing and it is available in a variety of colors. Denim is always a big pick because women can go simple with this style or dress it up with rhinestones and other New Style Mulberry Women's Daria Drawstring Leather Tote Blue Bag online, Find cheap authenticÂ Mulberry bags purse decorations. Owning a knock-off brand is illegal in most countries. Now keep in mind that many people purchase replica handbags. These handbags do not claim to be the original brand at all, but closely replicated facsimiles.. The unity along with aspect designed everything that he was quoted saying and even have. Most certainly Going helping receive them some sort of scholarship in order to Harvard, and also the gladness I believed when he arrived, even so ingrained together with his passion for makeup, no plussed through the common education and learning. Try this advice I only say with my well being? That enjoyed the provider however people today? I used to be both equally conversant in this laborer much like your culturally elite..

Completely I share your opinion. I think, what is it good idea.
Good business!
What nice phrase
What magnificent phrase
In it something is. I will know, many thanks for the help in this question.

Keep in mind that you might be only a name on a piece of paper and banking institutions rely heavily on the belongings and decryption of your credit history to determine the credit worthiness [url=http://www.pevmb.co.uk/]short term loans[/url] uk short term loans This is debate that these budget is specially offered for those people who have no consumer credit records along with bad credit lots http://www.1dayshorttermloans.co.uk/