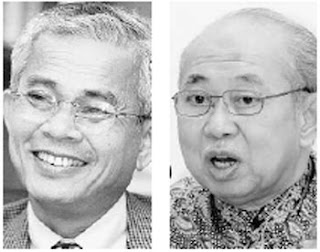 OPINION: The tide is turning for BN in Kelantan
By : ZUBAIDAH ABU BAKAR


Umno has gained ground in Kelantan since 1990, the year Pas handed a 39-0
knockout to Barisan Nasional. With talk of the general election around the corner, ZUBAIDAH ABU BAKAR takes a look at the coalition’s chances against Pas

AFTER 17 years of Pas rule and retarded economic growth and opportunities, there are many in Kelantan who want to see a change of government.

Yet, despite the Barisan Nasional coalition's vast inroads in the state, almost defeating Pas in the 2004 general election, it is still a toss-up whether the BN can break the stranglehold Pas has had on Kelantan since 1990.

Kelantan is one of the few states in the country which has experimented with change in government by voting in the opposition six times since independence.

What, therefore, will stop Kelantan folk from giving the BN victory this time?

One man who has dominated the Kelantan political scene since the late 1970s, former finance minister Tengku Razaleigh Hamzah, believes it is not all doom and gloom for the BN.

"There is an even chance for the BN to win because Pas has not done much for the state. It (Pas) has depended greatly on (Datuk) Nik Aziz (Nik Mat), who of late is ill.

"Pas is not strong. People may give the BN their support if they feel comfortable with leaders they can trust," Razaleigh, who is Gua Musang MP, says.

Leaders they can trust -- that seems to be the key phrase used by astute Kelantan political analysts.

To be fair, Umno, the dominant partner in the BN, has introduced many programmes and development projects which have brought benefits to Kelantan.

And promises are being made to pour in greater amounts of money and projects into the state -- if the BN wins.

Yet, one cannot shake off the doubts that some Kelantan folk have when it comes to the leadership of Kelantan after Nik Aziz.

Umno veteran and former party information chief Tan Sri Hussein Ahmad says: "Umno is just playing Pas' game. They copy what Pas has done but they have yet to convince the people they are ready to take charge."

"We must offer alternatives, not copy what Pas is doing. Like football, your team will lose if you follow the opponent's game," he says.

But there are others who disagree with Hussein, remembering that he was at the peak of his power. They say Umno lost Kelantan to Pas and despite being in a key position as Umno information chief for much of the 1990s, neither Hussein nor his colleagues could strategise well enough to achieve as good a result as the current crop of Umno leaders did in 2004.

Umno, to win the next election, is coming up with a manifesto titled "Wresting Control of Kelantan".

State Umno liaison chief Datuk Annuar Musa, whose leadership is disputed by some within Umno circles and exploited by Pas, says the thrust of the programme are three mega projects worth RM2 billion to complement what has been outlined under the East Coast Economic Region to jump start development in the state.

Annuar is confident that Umno is doing the right thing.

"I can see that the momentum for Umno and BN is increasing and there is no reason why we can't unseat Pas this time."

But another Umno leader disagrees.

"We have programmes but nothing close to what Terengganu Menteri Besar Datuk Seri Idris Jusoh did months before the 2004 general election. He and Terengganu Umno leaders were on the ground almost 24 hours a day," the leader, from the Kota Baru division, says.

"We may not have a towering figure like Nik Aziz. But if we have a combination of leaders with good leadership skills and a clean image, we will be accepted by the people."

The great Pas hope, Datuk Husam Musa, a party vice-president and state executive council member, who himself is not without detractors among the rank and file, says he is not sure whether the BN manifesto will be able to swing votes to Umno.

But perhaps the greatest indicator that people yearn to see BN back in power after 18 years under Pas rule is the fact that the coalition has slowly, but surely, been gaining ground since 1990.

Then it went on to secure 21 of the 45 state seats and eight of the 14 parliamentary seats, emerging as a credible opposition party in 2004.

Pas' majority was further eroded when the BN won the Pengkalan Pasir state seat in a by-election in 2005, leaving Pas hanging with a one-seat majority.

"The 2004 results were a pleasant surprise to Umno. It also shows that many people are with us. We should concentrate on issues such as health, education and the economy. This is fardhu kifayah (collective obligation)," says Datuk Hassan Harun, an Umno veteran who is one of those entrusted to fine-tune Kelantan BN's manifesto.

The BN's defeat in Kelantan in 1990 was because of internal bickering and defections by many good Umno leaders who joined its splinter party, Semangat 46, headed by Tengku Razaleigh.

The effects of the party's internal problems continued until the 1995 election, shortly after which Razaleigh returned to Umno.

But in 1999, in the early waves of the Datuk Seri Anwar Ibrahim issue which turned many Malays in the green belt states, the electorate again abandoned BN.

But once former prime minister Tun Dr Mahathir Mohamed -- the man most associated with the sacking of Anwar -- retired in 2003, things changed dramatically. In the 2004 general election, Umno came within a whisker of wresting control of Kelantan.

This gives confidence to people like Annuar that victory is within reach -- if Umno plays its cards well.

The battle between Pas and Umno in Kelantan is getting hotter by the day with both parties trying to outdo one another.

The recent floods saw leaders from both sides competing for support in helping flood victims. On flood rounds, Umno and Pas leaders kept bumping into each other, such as when Husam had to exchange friendly words with Tendong assemblyman Mohd Fauzi Muhammad while visiting evacuees in Pasir Mas.

Pas is not taking chances either.

It has introduced several welfare programmes, which later were emulated by Umno.

Nik Aziz believes that Umno's move to entice Pas supporters to switch camps through the use of schemes for the poor and needy will not work.

He says he is in fact happy, thanking Umno for "helping" Pas take care of the well-being of the Kelantan people.

"The programmes are well received but they do not necessarily translate into votes for Umno," says the 76-year-old party spiritual leader.

Since the battle between the arch rivals is more between personalities, Pas is prepared to field new and younger candidates to rejuvenate the party.

Pas had learnt a bitter lesson in 2004 because it did not drop certain elected representatives who were deemed unfit to contest.

"Pas' defeat was mainly due to it retaining some old faces at the last minute despite proposals for new faces to contest. Tok Guru gave in to last-minute lobbying and, true enough, these old faces failed to retain their seats," a party insider says.

Kelantan may be backward compared with other states but its people are no political simpletons.

They have no reason to support Pas, which has the leisure of ruling without doing much to help solve people's problems, but yet they are reluctant to let Umno rule unless it can assure them of good leadership.

Tumpat division information chief Datuk Wan Johani Wan Hussin believes the BN can form the new government although it is difficult to get a two-thirds majority.

But even the most confident Umno members caution that "any wrong move will lead us to be again so near and yet so far".
Posted by MY KU LI at 9:48 PM