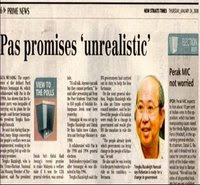 GUA MUSANG: The experience of the defunct Parti Melayu Semangat 46, which collaborated with Pas in the 1990s, has shown that the Islamic party was incapable of carrying out its plans for the people, said former Semangat 46 president Tengku Razaleigh Hamzah.
He said that during that period, many things concerning the people's welfare were not implemented, resulting in the people getting fed up with the empty promises.

"It's all talk. Anyone can talk but they cannot perform," he said after presenting aid from the Poor Students Trust Fund to 850 pupils of Sekolah Kebangsaan Jerek near here yesterday.

Semangat 46 was set up by Tengku Razaleigh and Datuk Dr Rais Yatim (now Culture, Arts and Heritage Minister) in 1988.
It collaborated with Pas in the 1990 and 1994 general elections.

Both leaders rejoined Umno after Semangat 46 was dissolved in May 1996.

Tengku Razaleigh said the BN government had carried out its duty to help the less fortunate.

On the next general election, Tengku Razaleigh who is also an Umno supreme council member, said he believed the people of Kelantan were ready for a change in government and would give BN the mandate to rule the state.

"The people already know which government can bring change to the people of Kelantan," he said.

He also said he was leaving it to the party leadership to decide on his candidacy. -- Bernama
Posted by MY KU LI at 10:40 PM