Umno does not need to reinvent itself, says Razaleigh 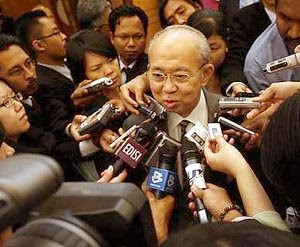 http://voiceofmalaysian.com/tag/tengku-razaleigh-hamzah/
Posted on 11 May 2008
Tags: ketuanan Melayu, Malay supremacy, Prime Minister, Tengku Razaleigh Hamzah, UMNO
KUALA LUMPUR: Umno veteran Tengku Razaleigh Hamzah is confident that the party will regain its support if leaders behave and govern the country fairly and justly.
Stressing that the party need not reengineer or reinvent itself, he said it was the excesses and arrogance of the leaders which caused anger and disgust among the people, leading them to vote any party except Umno.
In an interview with The Star, he said that if Umno was facing a crisis, it was one of “monumental significance”, not just to members and to Malays, but to the country.
“I cannot foresee the country without Umno. The Malays only know Umno and its allies. I cannot imagine how the Malays will behave or react without Umno on the scene,” he said.
Tengku Razaleigh said though some Malaysians greeted the results of the March 8 election results with euphoria in that it showed maturity in the thinking of the people, he took a different interpretation.
Centre of attraction: Tengku Razaleigh being mobbed by reporters on Thursday. The Umno veteran thinks that the party has a chance to make it back big if its leaders make the right move.
“It would have been different if Umno didn’t behave like that. Even if people had opted to go the multi racial make up of the PKR, for instance, they might have won some seats, but not to the extent of what they are enjoying now.”
On the issue of Malay supremacy or ketuanan Melayu, he said what was being bandied about was a fallacious way of looking at the term. He said the concept of ketuanan Melayu was more historical than anything else.
He said in effect, it wasn’t true and people were exaggerating it for political reasons or making demands because they were angry at having lost badly in the polls.
Asked what his priorities would be if he got the nominations to contest the Umno presidency and won it and become the Prime Minister, he said unity would be foremost on his mind. “To bring about unity in all aspects of government policies, programmes and even to the NGOs and the political institutions. That should also be the primary concern of everybody,” he said.
The 71-year political veteran said he would also “exhaustively” re-look the education system to ensure that it was geared towards unity.
He said he would also work to kill the cancer of corruption. Similarly within Umno, corruption through the form of giving of contracts, permits and money politics would be brought down without exception, he said.
TheStar News
Posted by MY KU LI at 8:07 PM