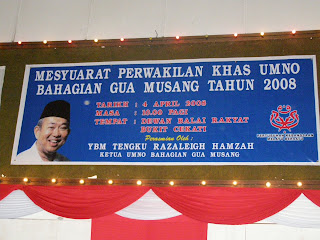 Gua Musang Umno says aye to special assembly
Posted by kasee
Friday, 04 April 2008
(The Sun) PETALING JAYA (April 4, 2008): Pressure on Umno's supreme council to call for a special general assembly is gathering momentum, starting with the Gua Musang division in Kelantan passing a motion to get the party's highest policy making body to organise the meeting to discuss the party's direction following its worst-ever defeat in a general election.

The motion was proposed by division information head Datuk Nozula Mat Diah and seconded by committee member Mat Yusof A Ghani. After a debate, some 400 delegates from 119 branches voted for it.

The special meeting at Bukit Cekati was opened by division head Tengku Razaleigh Hamzah, who had since the polls been calling for an extraordinary general meeting to discuss what he termed as an "emergency" considering the size of the defeat.

Because of the wide publicity given to the meeting, it drew some 200 observers from Selangor, Federal Territory, Kelantan, Terengganu, Johor, Perak, Pahang, Kedah, Perlis and Negeri Sembilan.

They also wanted:
> the Youth, Wanita and Puteri chiefs to be given the same powers and rights as the vice-presidents.
> candidates contesting for Supreme Council posts to be a member of the party for five years on the date of registration as a candidate.

Meanwhile, in Muar, 26 of the 33 committee members of Muar Umno want the division to hold an EGM on April 13 to discuss the nomination quota system.
Zakaria Mahadi, who represented the 26, submitted a notice asking for the EGM to division secretary, Fadzil Sapuan, yesterday.

The Federal Territory Umno liaision committee has left it to the party's Supreme Council to decide whether a similiar EGM should be held.
Its chairman, Datuk Seri Zulhasnan Rafique, said this was agreed to by the committee at a meeting it held on March 31.

While the momentum picks up, some members of the administration are speaking out strongly against former premier Tun Dr Mahathir Mohamad, who had repeatedly attacked the party leadership and asking members to speak up and to be bold.

Information Minister Datuk Ahmad Shabery Cheek called on members not to allow the tragedy that saw Umno being declared illegal in 1988 during Mahathir's leadership to be repeated.

Referring to his repeated statements asking members to press for a change in leadership and to voice their opinions, Shabery suggested Mahathir should be careful when making public statements as Umno was previously deregistered because of the various statements that were made openly.

Speaking to reporters after the Information Ministry Monthly Assembly at Wisma Radio, Angkasapuri, here today, Shabery said: "I fear that Umno will sink further after it first began to sink during Tun Dr Mahathir's reign when Umno was deregistered."

On Mahathir's criticism that supreme council members had become yes men to the party leadership, Ahmad Shabery said during Mahathir's leadership many rules were made, including the bar on contest for the president and deputy president's posts.

"There was no contest (for president and deputy president's posts) after 1987 but now he is saying it is undemocratic. The Malay have not forgotten all these things but maybe Mahathir has forgotten. I am sad to talk about all these things but the openness in Pak Lah's era should not be taken advantage," he said.

Ahmad Shabery said Mahathir had also reminded delegates to the Umno General Assembly in 1997 that criticisms against the party and its leadership can only be made through party channel and not outside the party.

"This is because if everyone start criticising and condemn one another from outside the party, this will destroy the party. I worry if this happens, he (Dr Mahathir) is the one who can be considered to have destroyed Umno," he said.

Shabery also said that during Mahathir's leadership, many Umno leaders were detained under the Internal Security Act as they were seen to be a threat to national security but actually they were a threat to his leadership.
Posted by MY KU LI at 12:02 PM