Making Umno relevant to all races 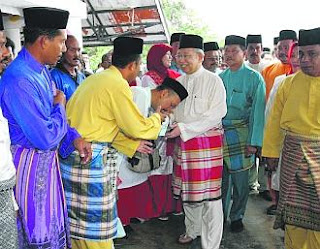 'We want Umno to be a supra-ethnic party, a national party that is fair to all people regardless of race but still defending its traditional vision,'

By Carolyn Hong, THE STRAITS TIMES

LOYAL SUBJECTS: Grassroots members greeting Tengku Razaleigh at the Umno divisional meeting in Bukit Cekati yesterday. In a speech, which observers say was almost presidential, he laid out his vision for a new Umno.

GUA MUSANG (KELANTAN) - KELANTAN prince Tengku Razaleigh Hamzah yesterday called for a remaking of Umno into a 'supra-ethnic' party that is relevant for all races, in the wake of its crushing losses in the general election.

'We want Umno to be a supra-ethnic party, a national party that is fair to all people regardless of race but still defending its traditional vision,' he said.

He is the first senior party leader to broach the idea of Umno facing up to the new political landscape, setting out a vision of a Malay party which had multiracial sentiments at heart.

He, however, did not suggest opening the party to non-Malays.

'Umno's vision has to cross ethnic boundaries and it cannot be seen as a party for Malays only,' he said.

The prince was speaking at a meeting of his Gua Musang division in rural Kelantan and kicking off his campaign yesterday to challenge Prime Minister Abdullah Badawi for the party presidency.

The meeting was convened to call for a national extraordinary general meeting (EGM) to discuss the electoral losses.

But the 3,000 Umno grassroots members who turned up at the hall in Bukit Cekati, about 150km from the Kelantan capital of Kota Baru, were there to hear Tengku Razaleigh lay out his vision for a new Umno.

Observers note that the speech was almost presidential in nature as he made his most serious bid yet for the top party post, which traditionally comes with the prime minister's job.

Datuk Seri Abdullah has been under intense pressure since the March 8 polls, battling internal rebellion in his own party and attempts by the opposition to woo party leaders.

The idea of non-racial politics has become increasingly appealing to Malaysians, who voted overwhelmingly for the opposition which campaigned on that platform. But Tengku Razaleigh is taking a calculated risk here as it is not certain whether the Umno ground will be receptive.

'Umno must be trusted by not just the Malays but also non-Malays,' said the prince.

He noted that in the polls, Indians and Chinese did not hesitate to vote for Islamist candidates because they believed them to be God-fearing.

He said that to non-Malays, Umno is a fanatical Malay party prone to waving the keris to threaten other races. And to many others, it is a corrupt party filled with 'crocodiles' and 'sharks' who lobby shamelessly for contracts.

The difficulty now, he said, was to prevent Umno members from abandoning a sinking ship because of a weak captain.

Umno can only be saved if the 'bad, corrupt, uncultured, immoral and unwise' people at the top are removed, he said.

Speaking to supporters at another function on Thursday, he used even stronger words: 'Today, we have a president of Umno, a chairman of Barisan Nasional and a prime minister. What we lack is leadership.'

Tengku Razaleigh will take his battle to Muar in Johor next week when he speaks at a meeting organised by Umno branches.

He is, so far, the only challenger to Datuk Seri Abdullah but the Umno veteran has not won the support of any of the powerful warlords. No big names were at his meeting yesterday,

This can be crucial as he needs 30 per cent of the party's 191 divisions to nominate him for the contest. His division called for an abolishment of this ruling and other leaders have expressed support but none has taken concrete steps towards it.

He needs half of the divisions to vote for a national EGM, at which time the abolishment of this ruling can come in for a vote.
Posted by MY KU LI at 8:31 PM