Tengku Razaleigh ready to step up - the Star 20 March 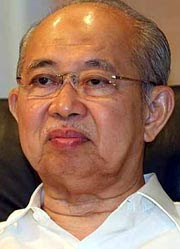 He said he was willing to offer his services including the possibility of offering himself for the top post, adding that it is up to the party members to decide.


Tengku Razaleigh: ‘I am independent from any influences and am willing to serve.’
“I am just a normal member now. I am ready to serve if my services are needed,” he told newsmen at his home yesterday.

He has returned to chair his Gua Musang Umno division meeting today where members are expected to pass a resolution seeking division and national-level extraordinary general meetings (EGMs).

The EGMs will seek to discuss the party’s dismal showing in the polls and its future.

Asked if he would contest the top post if there were adequate nominations from the divisions, Tengku Razaleigh, or as he is affectionately called Ku Li, said he was ready as he was still fit.

“Now I am old but still fearless.”

On whether securing adequate nominations would be an issue, he said he had previously voiced that the nomination process was deemed undemocratic but that he was an Umno member.

“I would need to follow the proper channels and the party constitution. Anything is possible in politics.”

His personal view is that Umno was not formed for an elite few or those who are power crazy until they forget about the party.

“It would be a shame if we have such leaders,” he said, adding that Umno needed to correct its weaknesses and be strict about it or it would lose its right to defend the Malays and the country as a whole.

Asked besides sending letters to division heads for an EGM, was he willing to step forward to rehabilitate Umno, Ku Li said that if given such a responsibility, he was willing to accept it but stressed that there may be some quarters who may be afraid of him.

“I am independent from any influences and am willing to serve. I only have to answer to God (Allah),” he said.

If Umno did not take remedial and dynamic measures, he predicted that the party would be rejected by the people in the future.
Posted by MY KU LI at 1:38 AM