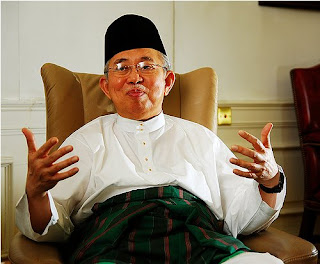 Tengku Razaleigh started by saying Tun Abdul Razak was a very visionary man and his thoughts were much ahead of his time. At a time where the nation was still lack of so many essential services and basic needs, he had slowly crafted a solution to bring the nation forward.

According to Tengku Razaleigh, the British had a very cunning “Divide and Rule” manner, where different ethnic group were treated and managed with different set of policies and pace, regardless by design or default. The most glaring policy differences that were planned and implemented were on developmental economics and education.

Developmental economics then, can be called as “segregation economics”. The were serious disparity between the ethnic groups, their economic standing and progress and productivity, were at different level. The rural areas, where generally the Malays live, were left undeveloped where as the industries and commercial activities were carried out specifically in the urban areas; where the British placed the Chinese. The Indians were mostly in the estates.

Therefore, there is a serious poverty and under development issues amongst the Malays, who were the majority of the people in Malaya, being shunned away from the basic needs, essential services and infrastructure. The employment and vocation patterns shows further disparity. The Malays were only allowed subsistence economy status. The Chinese, however, were encouraged working the tin mines, then opening businesses and do trading. The Indians worked as estates and railroad / public work labourers. Some Indians, from the British experience in India, were allowed to practice technical and professional services.

The economic cake needs to expanded so that the Malays can play in the game by not taking from the non Malays existing portions. An extension to the economic cake is to provide the 30% requirements of the Malays.

A consultation between all the parties were called (with the exception of DAP, which refused!) and they came to a consensus. The New Economic Policy (NEP) was born in August 1971.

Tengku Razaleigh explained that NEP was not against free market principles. NEP is a tool just to adapt and allow the Malays into the free market game. He also explained the NEP is a structured social re-engineering package and it is actually a National Agenda (not a Malay Agenda). It is necessary to form national integrity.

Another important topic which Tengku Razaleigh touched is National Culture Policy (NCP). NCP is about a tool of national integration and unity. NCP main components are:

1. The indigenous peoples’ culture is the core basis of the National Culture

2. Other cultural elements which are suitable and able to be assimilated into the National Culture will be allowed

3. Islam is the very important aspect in the development of the National Culture

Tengku Razaleigh explained that the NCP does not intend to ‘Malay-nised’ the culture or ‘Islamize’ the faith of the non Malays. NCP will be the model the foster common national values. In short, NCP is a ‘social re-engineering’ plan to integrate Malaysians, crafted by Tun Abdul Razak.

Tun Razak also wanted the Malays to shed off the “rural mindset” and start to adopt “urbanization thinking”. Tengku Razaleigh then went on to tell about his long, close working relationship with Tun Razak, beginning in 1962 till the latter’s demise in 1976. Tun Razak had asked Tengku Razaleigh to start and develop landmark agencies such as Bank Bumiputra, PERNAS and Petronas.

Tengku Razaleigh reminded that its not Government’s duty to go into business. The one of the responsibility of the Government is to induce investments from abroad, to generate economic activities. The Government, however, has moral duty to protect the country’s sovereignty not allow the land within these borders be economical assets of powers from elsewhere.

Tengku Razaleigh ended his lecture by asking everyone to go back to Tun Razak’s thinking and policies, for the betterment of the Malays and the others, as well as the nation.

Amongst those in the audience was former Prime Minister and UMNO President Tun Dr. Mahathir Mohamad. Tun Dr. Mahathir was then invited by the organizing Chairman, Tan Sri Arshad Ayub, to off-the-cuff address the seminar.

Tun Dr. Mahathir took the rostrum and talked how he was given a second chance by Tun Razak and appointed as the Education Minister in 1974, after being sacked from UMNO earlier by Tunku Abdul Rahman Putra. He also explained that Tun Razak was instrumental to ensure that Dato’ Hussein Onn appointed him as his Deputy.

Tun Dr. Mahathir sportingly said that he had differences with Tengku Razaleigh once. However, he went on saying that he allowed many people who went against him to comeback to the fold for the sake of Perjuangan, even appointed some of them as Cabinet Ministers, including the current Prime Minister. Tun Dr. Mahathir coyly joked that he almost took Tengku Razaleigh back into the Cabinet one time but after an article appeared in Far Eastern Economic Review, the former had to “review” the appointment. This two men’s sportsmanship drew laughter from the audience.

Tun Dr. Mahathir last word was he considers himself to be a Tun Razak man as well. However, he has his own interpretations to Tun Razak’s social re-engineering package plan and consider this a ‘norm’, although some people might interpret the variations as “differences”.

Although the weather was terrible, it was indeed a very good afternoon to have the two best Malay minds, on the same platform.


However,these two great Statesmen has no longer any political ambition to speak of.
thus their sincerity is no longer in question.They were the policy makers closest to the Generation of Tun Razak ,who understood the poverty of people in thre rural areas at that time.

Sadly the poverty still exist rearing its ugly head refusing to go…its easy for present leaders of UMNO to be lulled into believing that we have eradicated poverty in rural masses.The criteria used and reminded upon the kg folks again and again is how fortunate of them to have water and electricity supply ,a nice school for their children to go to or perhaps a better road system to ride on.Isnt it just the right of every citizen and responsibility of any Goverment to provide such facilities?

How much capable are poor Malays rural youth in dealing with Globalization?They are ill equip with skills and education would soon be asked to compete with better train foreigners who offered their skills at cheaper cost. Without the advantage of reasonable minimal wage,the companies would continue hiring forigners thus sidelining bigger and bigger no of ‘unemployable’ youths. With low qualities graduate churned out by Universities finding it difficult to get jobs,what chance is there for these youth to gain asses to mainstream economy of the country?They would only be hired to work in fastfood joints,as security guards or any lowpaying jobs.Even that we influx of cheaper labours from Indonesia,Pakistan and Nepals the employers tend to shun them away too.

UMNO at kg levels are filled with ‘yesman’ committe members who themself lulled into believing that their rentseeking business is the business models able to stand the onslought of globalization.Their business saviness is so ‘paperthin’solid ,yet they yelp a loudest bark.Parading their new found material wealth in the form of luxury cars attesting to their business saviness for everyone to see.
Posted by MY KU LI at 5:29 AM

Generic Viagra (sildenafil citrate; brand names include: Aphrodil / Edegra / Erasmo / Penegra / Revatio / Supra / Zwagra) is an effective treatment for erectile dysfunction regardless of the cause or duration of the problem or the age of the patient.
Sildenafil Citrate is the active ingredient used to treat erectile dysfunction (impotence) in men. It can help men who have erectile dysfunction get and sustain an erection when they are sexually excited.
Generic Viagra is manufactured in accordance with World Health Organization standards and guidelines (WHO-GMP). Also you can find on our sites.
Generic [url=http://viagra.gertantis.ru]legal buy viagra online[/url] is made with thorough reverse engineering for the sildenafil citrate molecule - a totally different process of making sildenafil and its reaction. That is why it takes effect in 15 minutes compared to other drugs which take 30-40 minutes to take effect.
[b]soft generic viagra
do generic viagra work yahoo
viagra being prescribed for inmate
effects of beer and viagra heartburn
viagra retinitis pigmentosa
Viagra Pill Photo
long term effects using viagra
[/b]
Even in the most sexually liberated and self-satisfied of nations, many people still yearn to burn more, to feel ready for bedding no matter what the clock says and to desire their partner of 23 years as much as they did when their love was brand new.
The market is saturated with books on how to revive a flagging libido or spice up monotonous sex, and sex therapists say “lack of desire” is one of the most common complaints they hear from patients, particularly women.

alprazolam xanax high how many - xanax side effects recreational use

http://landvoicelearning.com/#57594 ordertramadolonline - where can i buy tramadol over the counter in the us